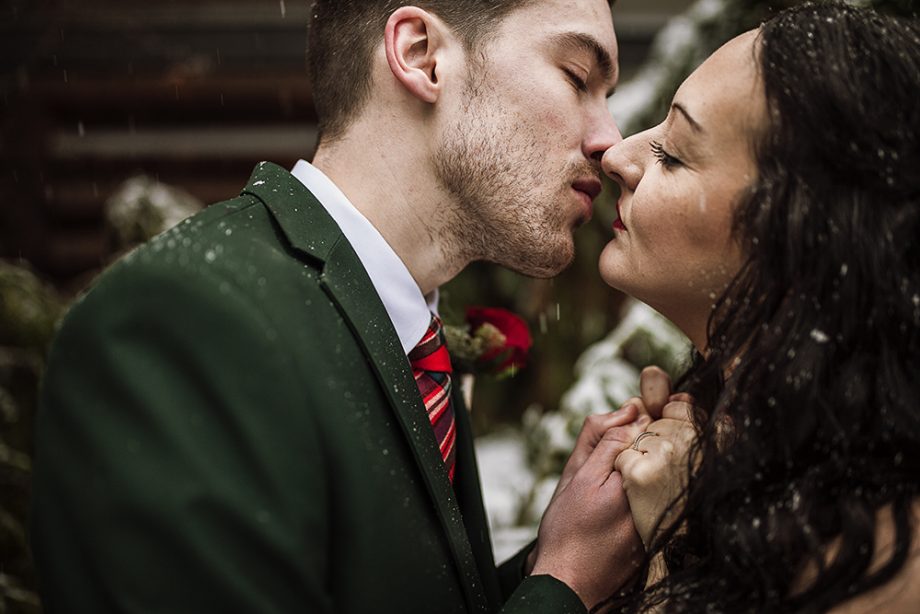 Natalie and Steve eloped on Christmas Eve at one of Parksville’s most popular wedding venues, Tigh Na Mara. They had originally planned on marrying at Tigh Na Mara in the summer, with a large guest list that involved their family and friends from across Canada and even Scotland, where Natalie is from. But as they began to plan and juggle the constant Covid-19 regulation changes, they started dreaming of a romantic, intimate elopement instead. How magical would it be to marry each other with just their parents and very closest best friends on Christmas Eve instead? The more they thought about it, the more they realized this is what they wanted.

Eloping at Tigh Na Mara on Christmas Eve did indeed bring a sense of magic with it; it snowed! This was the beginning of a two-week snow storm for Parksville, where that green grass we are used to seeing year round would be hidden under a blanket of white! Tigh Na Mara staff set up the propane outdoor heaters at their ceremony location under the covered patio area, allowing their guests to keep warm. After the ceremony, we took some photos at the Gazebo overlooking the ocean.

For the rest of the evening, Natalie, Steve and their wedding party enjoyed a relaxing, intimate night with each other. Tigh Na Mara set up a private catered dinner service in their cabin, allowing them privacy and not needing to bother wearing masks when travelling to the bathroom. Time and time again, Tigh Na Mara delivers exceptional customer experiences and I am so excited every time I have the honor of photographing couples making memories at this beautiful Parksville resort.