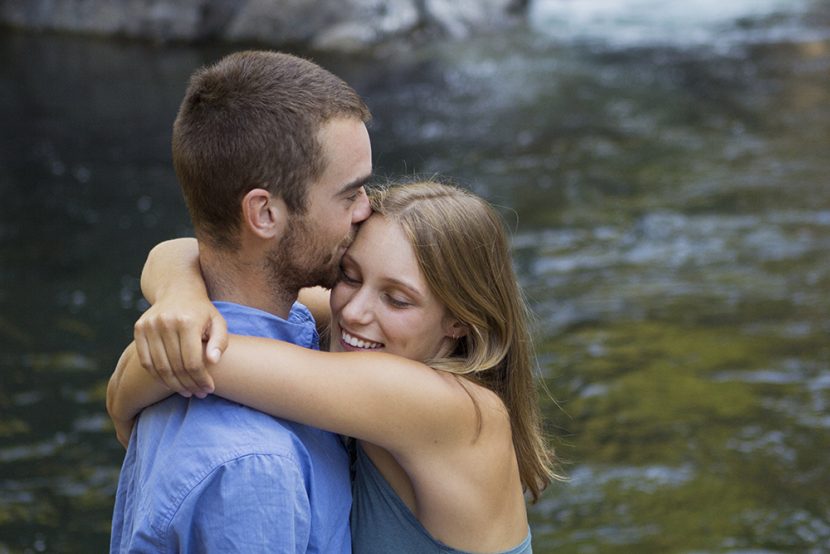 An adventurous Vancouver Island outdoor couples portrait session, set against the incredible Little Qualicum River that has carved its way through hard rock over centuries. It’s a spectacular river that flows cold and strong, especially during our winter months. This is a popular tourist destination, but us locals know where to go for the quiet, off-the-beaten-track locations. These two asked me to photograph their blossoming relationship in a location they both love to swim at during the summer months, a place they’ve both grown up with. They told me a story during our session, that they would hangout here together with a mutual group of friends during high school. Kevin had a big crush on Marrissa during those days, and it never really faded. A couple years after high school, that crush became mutual and now they are a totally rad couple! Their passion for learning, hard work and adventure keeps their schedules busy, but they always make time to be together while pursuing their goals. She even visits him at least once per summer, wherever he is while tree planting, embracing the hundreds of bug bites that come with the kisses.

Their adventure portrait session was barefoot, hot during the summer season, and included a refreshing swim. We jumped into that river like YEAH! I got to know them even better a few days after this as we took a float plane to Nootka Island off of Vancouver Island’s West Coast near Gold River to hike the Nootka Trail. Now that was an adventure! I love making new friends and opening up opportunities with people. Adventure sessions are my favorite, especially when they involve hiking, swimming or camping- or even better, all of the above!

Sarah Duncan
2018-05-14T00:14:29+0000
Deanna recently did a session for my family. I actually won the shoot in a contest. She was fabulous! Deanna and I... worked together to find a great location that was fun and suitable for my family. We met one evening after dinner so we could capture the glorious sunlight and seascape. Deanna was fun, got us all engaged in playing games and captured the moments in our pictures. She edited the pictures in a very quick time and we absolutely love them, she captured our family perfectly! I would highly recommend Deanna, lovely lady, fun, and took her time, never felt rushed. Thanks Deanna.read more

Alicia La Reina
2017-09-14T04:40:21+0000
Deanna captured our small family (just two humans and a dog) in an amazing shoot on Little Mountain!! She was patient... with the puppy and very instinctive when it came to the challenges of focusing her attention. She immortalized the most spontaneous and unique moments, all with perfect lighting and focus! Deanna is fantastic at communicating during the whole process and the turnover and editing time was beyond reasonable. Thank you De!! I look forward to hiring your talents again.read more

Hello beautiful world. I'm so excited to be photog

Can we always bring your classic car to the engage

Who needs an umbrella when you're wrapped in a pin

Crushing it year after year, these two are both fu

Hey this is me! My happy place is in the mountains

Loving all moms and grandmas today! I see my frien

Hey, do you smell that? May on Vancouver Island i

Each of their faces tell a story. Linked on both