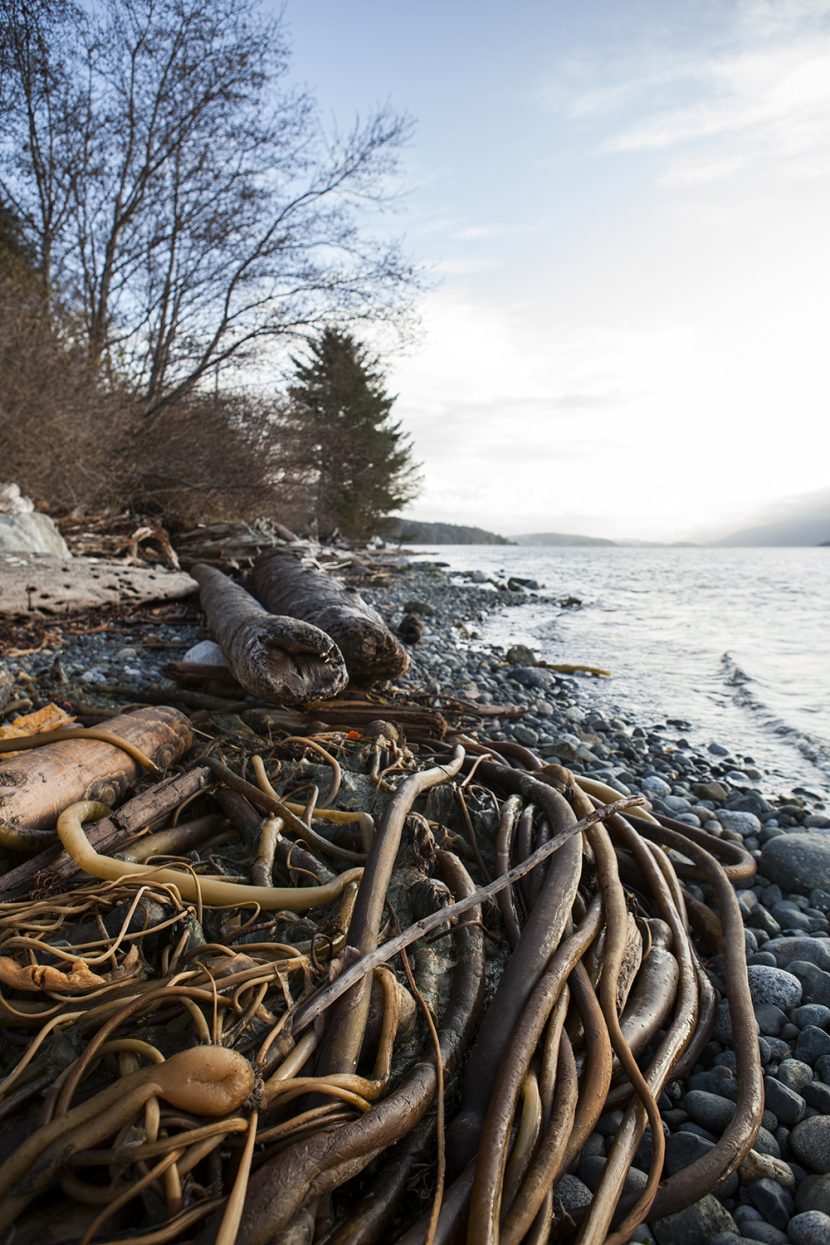 In November, myself, my two great friends and their young daughters loaded up the Subaru and hit the road for a Northern Vancouver Island road trip adventure. Our destination was specifically Alert Bay, where beach combing and exploring are plentiful. We could only squeeze in this trip over a weekend, so we spent just one night in the little town of Alert Bay on Cormorant Island. We visited the U’Mista Cultural Center, saw the worlds tallest totem pole, spent a few hours on multiple beaches, walked the downtown area, and drove down almost every road just to try to see it all! It was a lengthy drive to get there, but I always say that life is worth driving for and who doesn’t love a good conversation in the car? I want to shout out to my bestie Chloe though for literally squeezing in between two car seats holding kids and not complaining about it once- she opted for the back to allow our other friend who was quite pregnant at the time the more spacious front passenger seat. That would have been too much of a squeeze!

How to Get to Alert Bay

Alert Bay is located on a small island called Cormorant Island off of Port McNeill on the northern end of Vancouver Island. From Parksville where I live, it is just under 320km and takes an average of three hours and twenty minutes to drive there. Once you reach the ferry terminal, your ticket pays for a round trip to two islands; Cormorant Island and Malcolm Island. Sointula is the community based on Malcolm Island and I highly recommend checking out both places if time permits. We decided to thoroughly explore just one place as we only had two days which included lengthy travel.

Things to do in Alert Bay

Cormorant Island has a rich history, and for those who have an appreciation and interest for it can be occupied for days here. The U’Mista Cultural Center is specifically what I’m talking about. This heritage and cultural center was established in 1980 with a purpose of collecting returned potlatch artifacts. The word U’Mista means “the return of something important.” It has grown into a well-known and world renowned museum that provides tours, an incredible collection of potlatch masks and other artifacts, and is a solid resource for scholars and researches. It has a lovely art gallery and a great selection of local artisan gifts. The book selection is great, and the staff are incredibly knowledgeable and helpful. It’s a must-see when visiting Alert Bay. Check out their website here!

Walking along the waterfront boardwalk that connects downtown with U’Mista Cultural Center you’ll see the marina, the old cannery building, and five “awakwas” shelters each with a carving of an Ngmgis Ancestor and a little sign that tells its story. Downtown is full of colorful and rustic buildings, a thrift store, a little cafe where you can eat traditional bannock, the grocery store and a couple of hotels. An old boarded up hospital can be found right beside the ancient burial grounds which is easily found by the multiple totem poles. Driving around the island, you can view the worlds tallest totem pole at 173′ in height. It’s quite the site to see! In the summer, my friends and I laid down in the grass and just stared at the sky. It’s a real neck-craner looking up to the top and much more relaxing laying down. I’d recommend bringing a pair of binoculars to view all of the carving details. 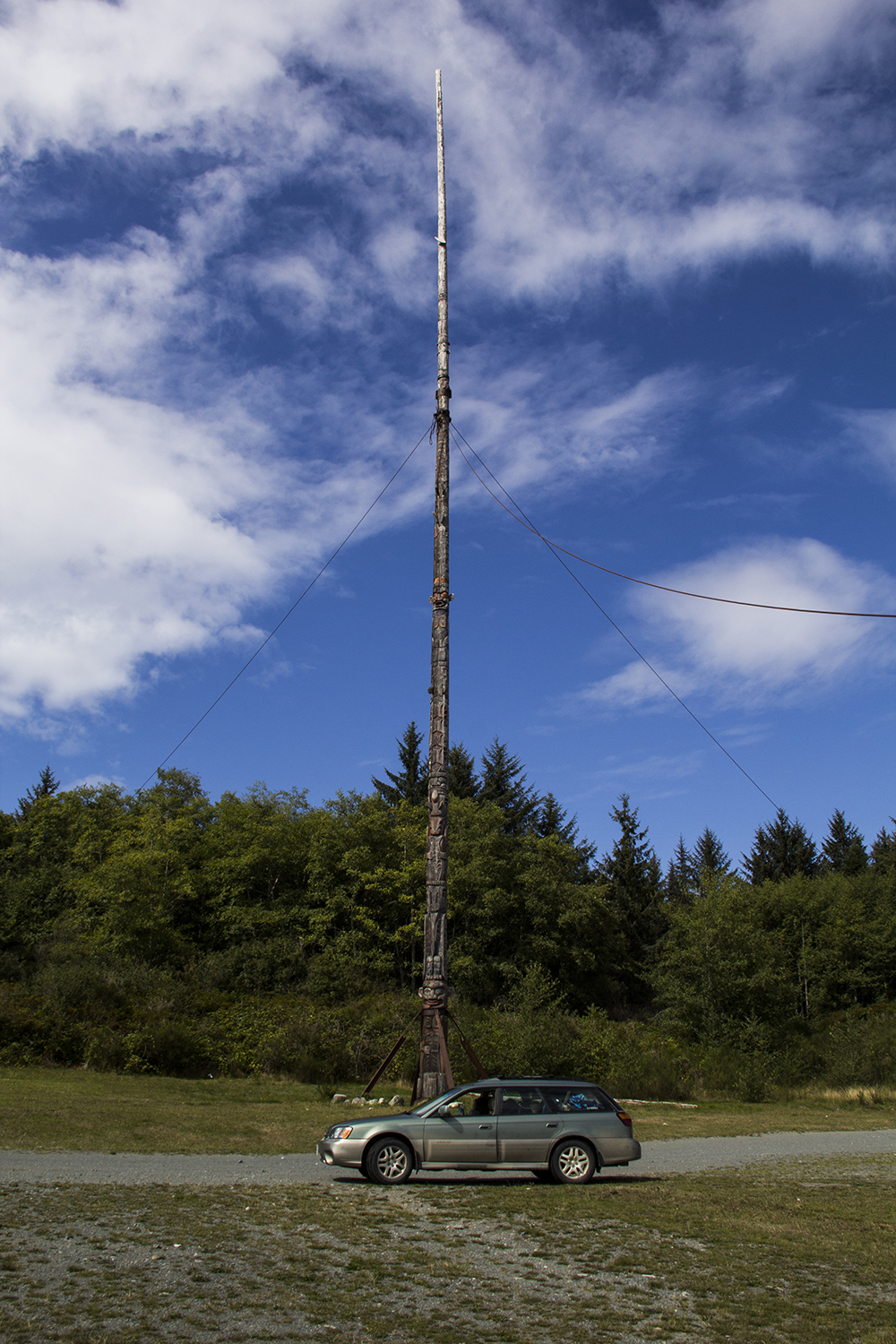 There are a few beaches on the island, but the long pebbly beach in front of the boardwalk was actually what drew us out here in the first place. My friend Chloe is a beachcomber and she says this beach has so much to find! She could spend hours here, she says. There are a few derelict boats washed ashore which are interesting to see. Driving around the island and talking to the locals is a fun activity, there are 16km of walking trails and a small playground for the kids. Alert Bay has so much to offer. Everything is within walking distance if you’d rather save some money by walking on the ferry instead of bringing your car.

Cormorant Island is a sacred place as this land was used as a burial grounds for centuries to the Namgis First Nations. The burial grounds now have multiple totem poles and is a gorgeous sight to see with waterfront views. The fishing was strong here on the island, and a large cannery was established. A sawmill eventually came to be which provided the lumber for many more houses and infrastructure. St. Micheal’s Residential School in 1929 was built to accommodate up to 200 children aged seven to fifteen years old. This residential school was destroyed in 2015, an event that drew many people to it for healing purposes and witnessing history. To read a great article that goes deeper into Alert Bay’s history, read here.

In summary, absolutely go check out Alert Bay or put it on your bucket list for an awesome Vancouver Island road trip destination!