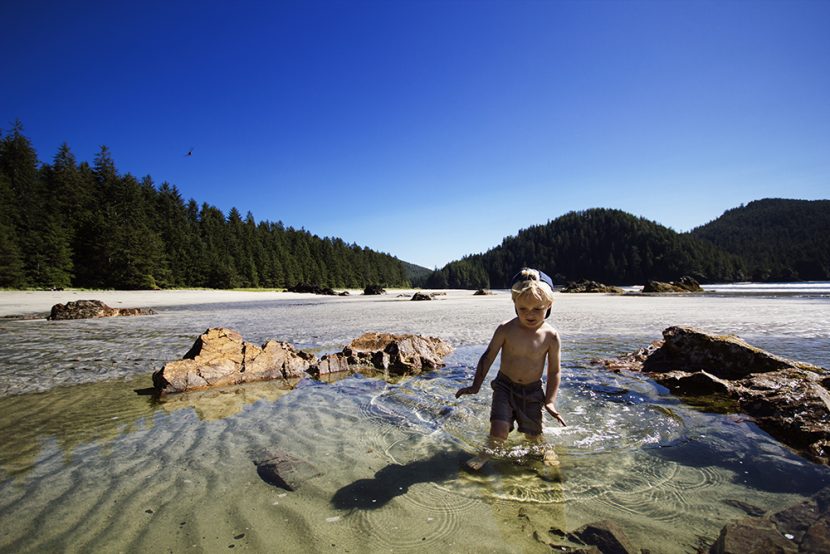 Last August my BFF and I loaded up my Subaru to the absolute fullest and then added two kids in car seats to top it off. We would be road tripping northern Vancouver Island and camping each night so we did need a lot of equipment, particularly the equipment needed for kids! Jaxson was three and Emily was eight months old. We brought a Bumbo for her to sit in during dinner and hangouts, a bassinet to sleep in, tons of kids clothing, toys, the tent, cooking stove, towels, food and wood. We even shoved a freaking gazebo beneath the kids feet for a quick rain shelter! Yepp we used it :) Chloe had never been past Campbell River and was eager to explore the North Island. I wanted to show her all of my favorite spots and fill up our four days with as much goodness as possible. We hit places like Myra Falls in Strathcona Park, Sointula and Alert Bay, Upana Caves, the worlds largest burl and the incredible San Josef Bay. It was a total blast including the challenges like getting a nail in the tire and midnight feed the baby wake-ups.

Our Camping Style- Winging It!

Our camping style was the Winging It Style. We didn’t have a concrete plan going into this, I never really do on road trips. We didn’t make any reservations as there are plenty of camping sites on the North Island and I wasn’t worried about finding something. We stayed at two forest recreation campsites and a regional campground in Sointula. I had plenty of locations in mind to share with my friend and we would just hit them if we could. The goal, however, was San Josef Bay, 420km from Parksville where we started our trip together (approximately five driving hours.) Or from Sooke where Chloe started her journey, 575km and seven hours of driving. Our route was indirect and involved taking back roads through Gold River. We estimated that over four days, we drove about 1000km from Parksville and back.

Some of our road trip camping challenges included a flat tire, three-year old meltdowns, soaking wet kids, keeping organized and running out of clean clothes. We got a nail in one of our tires in Sointula which kept going flat, so in the pouring rain I changed it at the local laundromat while Chloe did a load of laundry. She didn’t anticipate going through so much kids clothing so fast! This was day three of our trip and she was running out of clean clothing. I put the spare tire on which only allowed us to go 70km/hour. On our way to Port Hardy we laughed and laughed at how slow we were going and people needing to pass the Subu-Snail. We found a tire plug at the gas station in Alert Bay and I was able to plug up the hole at a gas station in Port Hardy. We were a little hesitant to take it on the logging roads to Cape Scott, but as I write this article nine months later, I’m happy to tell you that my tire is still solid!

We utilized every inch of my car, except the roof racks of course! Keeping organized is essential during road trips. Everything has it’s bag, and it needs to go back inside that bag just as before. Every time we put our stuff back in the car it was like putting together a 3-D puzzle. It was different every time and oftentimes you had to do it twice. These small challenges were nothing to stop the show though- I actually enjoy when things are tough because it means you’re pushing your limits. There were so many good times on this trip with my bestie who I’ve known since grade one. I loved spending time with her and her kids, listening to old CD’s including “Jessica’s 13th Birthday,” finding Jaxson’s Halloween outfit a thrift store, roasting food on the fire, swimming and exploring Northern Vancouver Island.

Things we Did on Our Northern Vancouver Island Road Trip