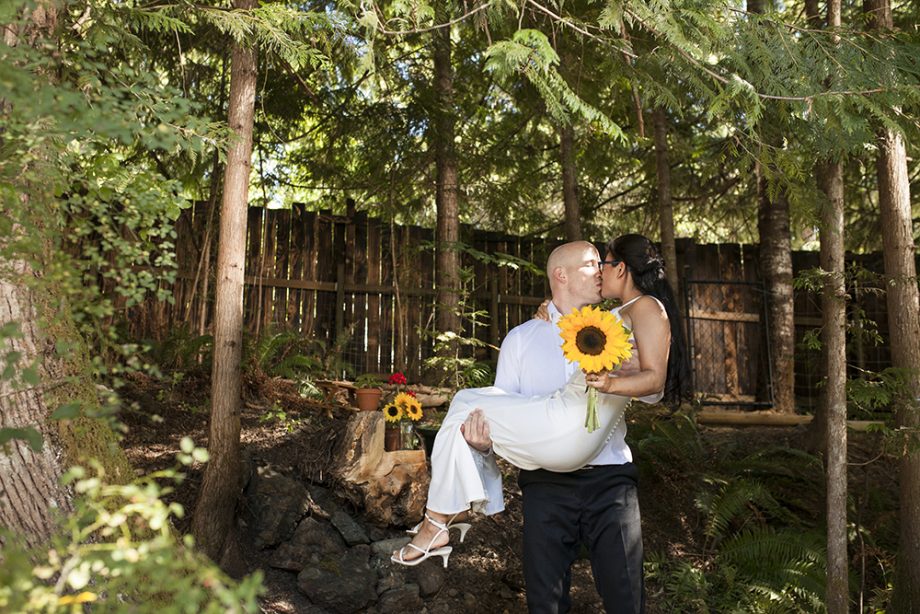 Felicia and Karl celebrated their marriage with an intimate backyard wedding on his parents Sproat Lake property in Port Alberni. These two powerful lovebirds have quite an amazing story, and had sooo much newness happening in their lives at this time that I can’t help but feel inspired by them. In addition to marrying each other, they had just moved to Vancouver Island, changed jobs, and adopted a Saint Bernard puppy! All in the span of a couple short months! Oh, and they were also actively house-hunting to buy their own home in Port Alberni. Just a couple months after their intimate backyard wedding, they did find their home sweet home. ♥

Felicia and Karl wrote their own vows, and Karl told the story of how they met which had everybody laughing and highly engaged. I’ll do my best to reiterate, but it can never be as funny as his original vows! Karl was working at the hospital the day he and Felicia were to have their first date. One of the patients that day bled on him, who tested positive for HIV. He then had to cancel on the date because he had been “exposed” to somebody with HIV. Despite the sketchy reason for cancelling their date, Felicia gave him another chance. Their bond was immediate and they quickly teamed up together to enjoy and pursue life. Congratulations you two, and thank you so much for having me capture your intimate wedding ceremony!