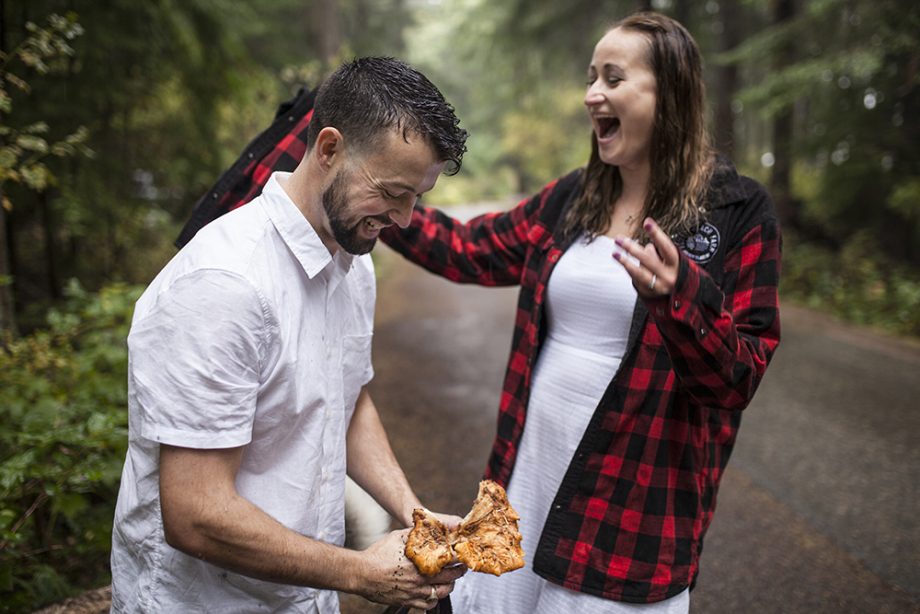 Nothing But Smiles in the Pouring Rain

On a pouring rain October day in Parksville, Karolina and Scott were nothing but smiles during their engagement photoshoot. Since they live on the mainland, rescheduling their photoshoot wasn’t ideal, so we decided to go ahead anyways even though there was heavy, steady rainfall. Right away, I could tell that the rain would not bother these two or their fur-babies. Equipped with waterproof Blundstones and backup clothing in their Toyota, they were perfectly comfortable to let the rain fall on them. At first, they wore their matching plaid jackets, and eventually took them off and wore a light summer dress and t-shirt! As we were walking the trails, passerby grinned at the happy couple wearing unusual attire!

During their engagement photos at Rathtrevor Beach, they jumped in puddles, cuddled underneath their clear umbrellas, danced under the falling maple leaves, enjoyed some champagne while laying on the beach, and even foraging for mushrooms! I had asked them what else they planned to do that day before catching their ferry back home. They told me they might search for Chanterelle mushrooms. Literally just a few minutes later as we were walking the path, Scott stopped mid-sentence and veered off into the bushes. With an enormous grin on his face, he returned with a healthy sized, in tact Chanterelle mushroom. Karolina’s face lit up and so did mine. I was so taken aback by the coincidence of finding mushrooms so soon after talking about it, that I had a hard time focusing the camera! It was a really cool moment and we were all stoked. After the shoot finished, they picked the patch and had mushroom stew for dinner back in Vancouver. The very next day, I took my boyfriend to Rathtrevor trails and had no luck finding any mushrooms. :P Hahaha.

Congratulations you two! So looking forward to your wedding in 2023!