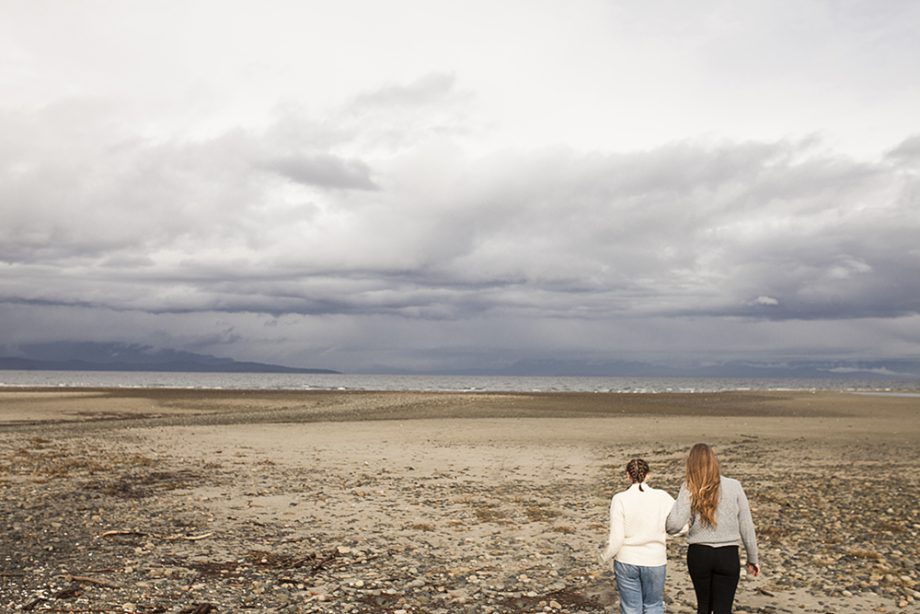 Kira was turning 21, and her sister Bethany wanted to surprise her with something special. A sneaky sister gift awaited Kira while sitting on a log at Rathrevor Beach. While drinking free Starbucks and chatting away with her sister and boyfriend at the beach, I snuck up from behind them with my zoom lens on and began taking some photos. Bethany had reached out to me about two months prior to this, and was very keen on adding an element of surprise to her sister. I loved the idea and was completely game for it. We coordinated well, texting each other at every move, until I gave the final text saying I was in place and ready to go. Kira had already peered back at one point and said, “Oh look, a creepy photographer lady.” Hahahaha I was indeed giving creepy vibes because I was trying to be unnoticed and sneaky! Omg!

Bethany turned around shortly after and said, “Hey look, it’s Deanna.” I had worked with them both at Naked Naturals years ago so I wasn’t a total stranger. Bethany then told her sister what was up; a birthday photoshoot at the beach! The timing couldn’t have been funnier though, as just moments before they turned around, Kira got a nose bleed and had nothing to stop it with! Luckily I had a tissue in my pocket and we were soon ready to go. The weather was incredible, shining lightly on us while giving a dramatic moody sky in behind. It was a beautiful day at Rathtrevor Beach.

Happy 21st birthday Kira! I hope every time you look at these photos, you are reminded of the beautiful bond you share with your sister. And boyfriend too of course! ;)