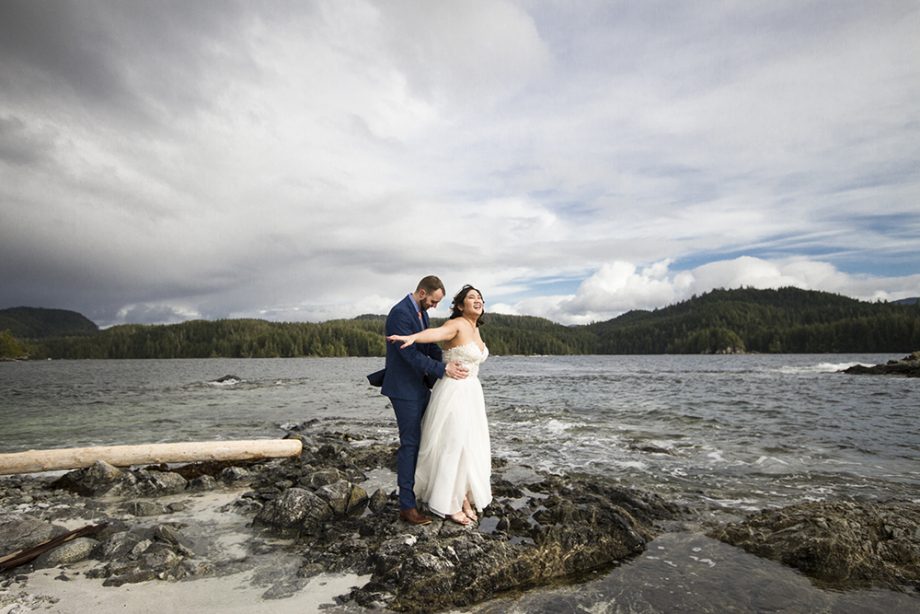 Melissa and Brandon enjoyed an adventurous helicopter elopement on Vancouver Island through West Coast Helicopters. They married on the mountaintop of Mount Cokely, livestreaming their wedding ceremony over Zoom with all of their friends and family. After a few romantic and playful photographs on the mountain, we flew in the chopper over to the West Coast of Vancouver Island where Melissa, Brandon and their three guests enjoyed a charcuterie board and bubbly on the beach in the Broken Group Islands. On October 10th, they were greeted with a warm and sunny day- a perfect blend for a high altitude wedding.

Melissa and Brandon met on Tinder a few years ago when they were both living in Ontario. Brandon was stoked when Melissa matched back with him, but neither of them anticipated that they had found their forever. Brandon works with the military, and was relocated to Vancouver Island for a couple of years. You bet Melissa went with him, and both of them fell in love with the wild natural landscape of British Columbia. When they learned about West Coast Helicopters all-inclusive helicopter elopement package, they knew it was perfect for their wedding. This helicopter elopement experience would highlight the natural beauty of Vancouver Island that would also reveal this chapter in their story as they reside in BC. They brought three friends with them; a military best buddy, and Melissa’s two closest girlfriends who flew out from Ontario to be with her. Throughout the day, you could hear giggles, music and laughter. They danced on the white sandy beach to a little portable speaker, enjoyed sipping bubbly in the sun, were awed at the 360-degree view atop of the mountain, and had a blast flying through the air effortlessly in the helicopter.

Charcuterie Board: The Noble Grazer