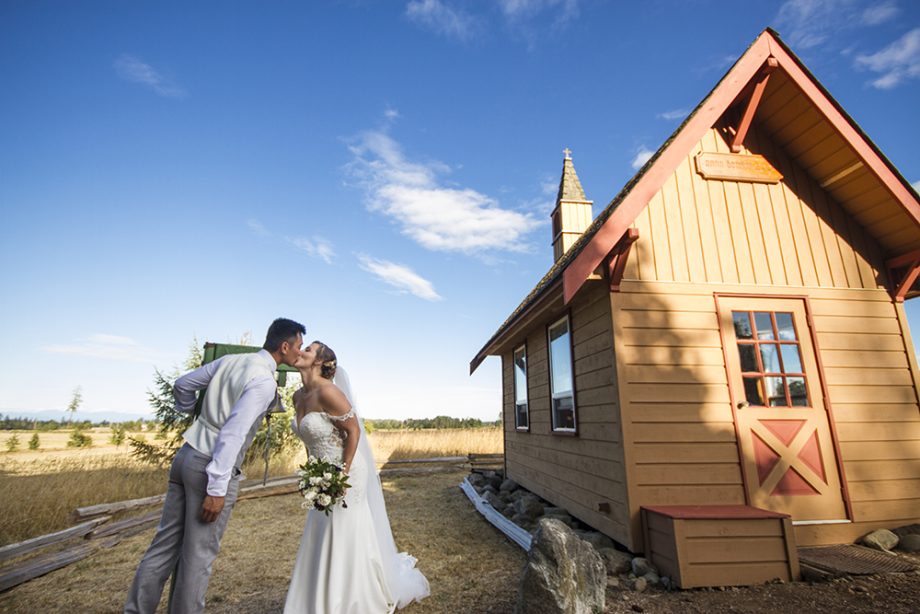 Married on Her Grandparent’s Farm, Riding Tractors and Dancing Under the Moon

Torill and Paulo’s Parksville farm wedding was an unforgettable good time for all of their guests, and will forever be remembered as one hell of a party. Torill’s grandparents own a huge acreage in Parksville, and were happy to host the wedding on their property. A winding driveway taking you remarkably far through the woods to the sprawling open field where their ceremony and reception was held, you felt like you were in your own bubble away from the entire world. A tractor and trailer drove the bridal party around for photos. Yard games, a pallet photobooth, an oversized chair, and other fun props entertained their guests throughout the event. They had a large covered canopy set up that sheltered them in shade during the hot summer day, and allowed them to dance under the Edison lights all night long.

Torill and Paulo got ready with their bridal party at the Bayside Resort in Parksville. Overlooking the ocean, the girls and guys prepared for the wedding day in separate rooms. By the gazebo, Paulo and Torill had their first look and exchanged personal vows. However, they had a prank first look for the groom before his real beautiful bride showed up next. One of his groomsmen was late that morning, and wasn’t answering his phone. The wedding day had to continue with or without the guy! Paulo was looking over the fence at the ocean as his “bride” walked up behind him and placed a hand on his shoulder. When he turned around, he saw his missing friend with a blonde wig, stuffed boobs and wearing a wedding dress! Everybody buckled over with laughter. Shortly after that stint, Torill arrived for real, and they had an emotional first embrace.

We took a few photos at the beach before heading over to the farm for the ceremony and reception. A large octagonal arch was set up in the huge grassy field with a couple dozen hay bales set up as seating. Through the arch, you could see Mount Arrowsmith in the distance. During the ceremony, Torill noticed a number of front hay bale seats empty, so she stopped the ceremony and asked everyone to come forward and sit closer. What a badass amazing bride!! *I see this often at weddings, it’s a good idea to designate someone to ensure all of the front seats are filled.* After the ceremony, Torills dad loaded the bridal party onto the tractor and drove up to the little chapel her grandfather built.

Torills grandfather who has owned this farm for many years built the little chapel up on the hill. In 2001, her grandpa was driving his tractor on the property when it rolled over a hillside and crumped. The tractor was destroyed, but her grandfather walked away unharmed. Within the same year, he was diagnosed with prostrate cancer. After surgery, he once again walked away unharmed and cancer free. Her grandfather felt fortunate to be alive and decided to build a chapel on his property. Friends gathered to help him build this, and gifts of stained glass windows and German artifacts filled the tiny space. He finished the chapel off with the bell that was originally on the tractor. What a beautiful story and a meaningful place to take bridal party formal photographs on their wedding day!

These Two Love to Dance

Torill and Paulo love to dance. They learned a choreographed dance for their first dance as a married couple, and had each pair of their bridal party dance up to the reception for the grand entrance. A friend DJ’d the night, and by the time I left the music was still blasting loud throughout the farmland where not a soul around would be bothered. Underneath the stars, their entire wedding guest list was grooving together and have a beautiful time. This was certainly a wedding absolutely JAM PACKED with fun. Paulo and Torill have a strong family and friend group, and you could tell everybody cared for each other and to make memories to last a lifetime. Congratulations you two!