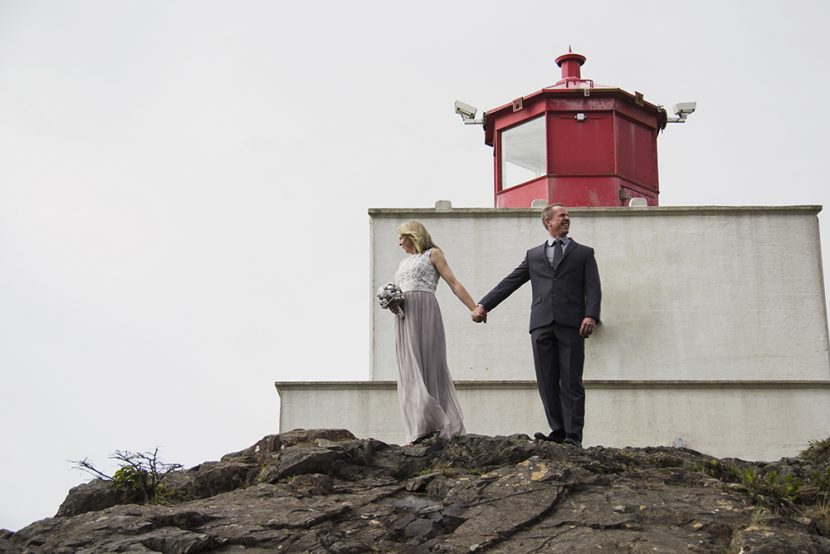 Janice moved west to Vancouver Island from the prairies, lured by the ocean and hiking trails. She was a letter carrier, and he was letter carrier. They met at work, and when I asked who had a crush on who first, they both giggled and Shane admitted he was the one to make the first move but Janice was sure happy about it. They instantly hit it off and led many adventures together, including some special times in Ucluelet and Tofino. They decided to get married. For both of them, it would be their second marriage. They wanted to marry in a casual and intimate setting, just the two of them in a place close to their hearts; the Wild Pacific Trail in Ucluelet. They needed two witnesses to make it official, and were happy to have the photographer and officiant sign. They would be congratulated by their loved ones individually and privately rather than in the grande way that weddings usually are. Janice and Shane would elope on the wild West Coast.

Faux Bouquet for the Win!

Janice selected a gorgeous dress, she tried it on and it needed absolutely no alterations. It was stunning on her and the saleslady at Dream Dress for Less in Nanaimo was convinced that it was made just for her. Tones of grey were everywhere on their wedding day; her dress, his suit, the West Coast weather, and also her beautiful handmade bouquet. You really don’t need real flowers that will only last temporarily; Janice found a satin rose piece adorned with rhinestones and artificial pearls from Amazon.Ca that was gorgeous to photograph. Take a look at it closely, three tones of satin roses, a circular shape and a comfortable handhold. Now that’s a bouquet you can accidentally drop and it’s going to be fine! They can keep that bouquet as a decorative piece for years to come! Wouldn’t you want one of those sitting pretty in your home?

Just the Two of Us, and Mom too!

The only thing you really need to become legally married is an officiant to marry you and two witnesses to sign the documents. Janice and Shane dreamed of a romantic Ucluelet elopement, immersing themselves in all of the areas wild beauty over a few days and spending quality time together. They were content that the two witnesses were people they did not actually know; the photographer and the officiant. They made that dream happen and it was perfect. It was still perfect when an unexpected guest came along too. Come on, put your Mom shoes on and imagine just how hard it would be to not be present at your sons wedding. So yepp, Mom came too to show her support and give her love.

Barefoot Love in the Pacific Ocean.

I drove to Tofino that early September morning from Parksville and let me tell you, I was driving through a lot of rain. I was worried that their sweet elopement would need to be taken undercover, but when I arrived, Tofino and Ucluelet were dry and thinly clouded. In fact, during their ceremony the sun shone brilliantly. We took a few playful portraits on the Wild Pacific Trail, at the Lighthouse and then drove to Wickaninnish Beach to continue. The clouds came back but it did not rain. I had them spinning and hugging, making up secret handshakes without their hands, whispering silly things into each others ears, and I also asked them if they would like to feel the sand and Pacific Ocean between their toes. They said yes! It suited their adventurous and playful spirit, and I’m thankful Shane balanced on one foot at a time to remove his dress shoes for it. It was cold, but oh so heart-warming. Congratulations you two on your latest and greatest adventure!