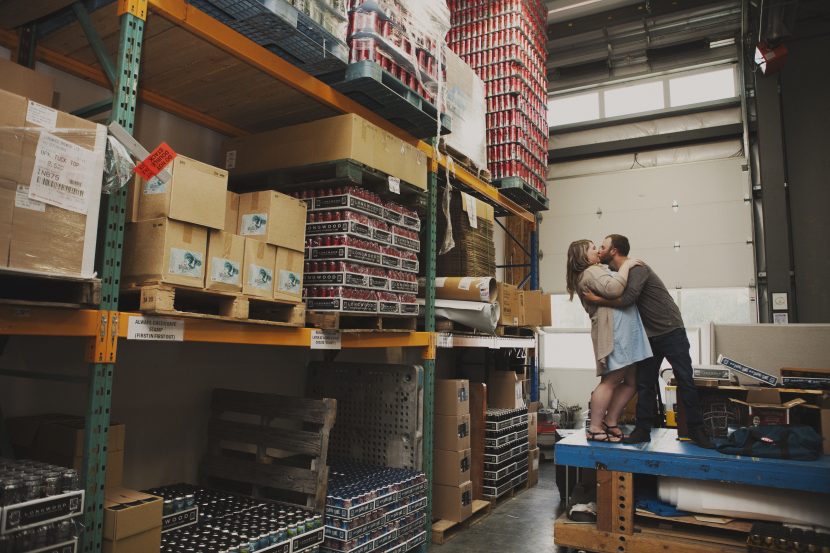 Brooke and Adam love a good craft brew beer; they met over beer, she was employed by craft beer, and have gained many friends and memories due to it’s social tendencies. We decided that shooting at the Longwood Brewery in Nanaimo for their engagement photos was a perfect storytelling setting. We shot part 1 at the brewery where Brooke worked and finished at the Lantsville beach so they had a few photos that weren’t all about beer. ;)

We photographed their engagement session in mid-June, a very warm day on Vancouver Island where the coolness of a refreshing drink was well accepted. After playing around near the beer vats and the beer storage room, we had a little beach picnic and got to know each other. I encourage at least one outfit change during an engagement session so there are a variety of casual and more formal attire. You will notice that they switched for brewery and beach. I was so excited when they jumped in their red 1964 El Camino, a hobby that Adam shares with his grandpa.

Moody sky days, leanin into the moment with her lo

It's not having what you want It's wanting what yo

Brothers in Bowties ♡ In guise as little charmer

I had to keep telling this kid to "medium smile" h

Samoyed smiles 🐾 These two adorable dogs are in

What should you wear to your Fall photoshoot? Text

Rainfall Warning in effect! Expect a LOT of rain w