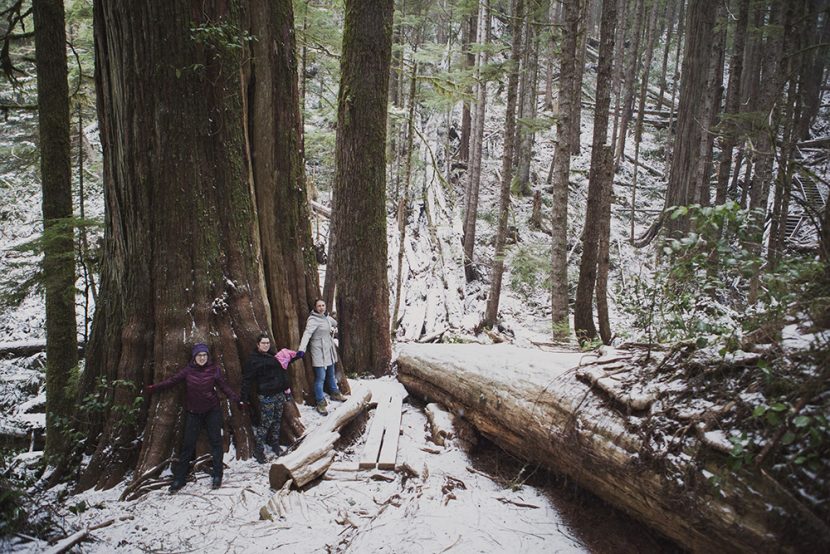 I am SO fortunate to have two incredible circles of close girl friends. Every year, I enjoy an annual girls trip with each group. That means two trips a year for me- I am so effing blessed! In 2019, we decided to rent a fully-equipped cabin in Port Renfrew in early February. We loaded the Ford up with our winter clothing, wine and booze, a one-year old baby and way too much food before cramming another five women inside. We were fully loaded and ready for a good time. We didn’t pay particularly close attention to the weather, we knew there was a chance of snow, but living on the West Coast we are used to rain washing away snow quite quickly. We would spend three nights at the Fish Tales cabin in Port Renfrew and the only time we had electricity was during the first few hours of our stay. For the first day or two, we optimistically thought the power would turn on any minute- but that was not the case. This was an epic adventure full of positive and savvy women, majestic elk, tons of snow, beautiful old growth trees and incredible West Coast beaches. No doubt, this girls trip will go down in history for us. 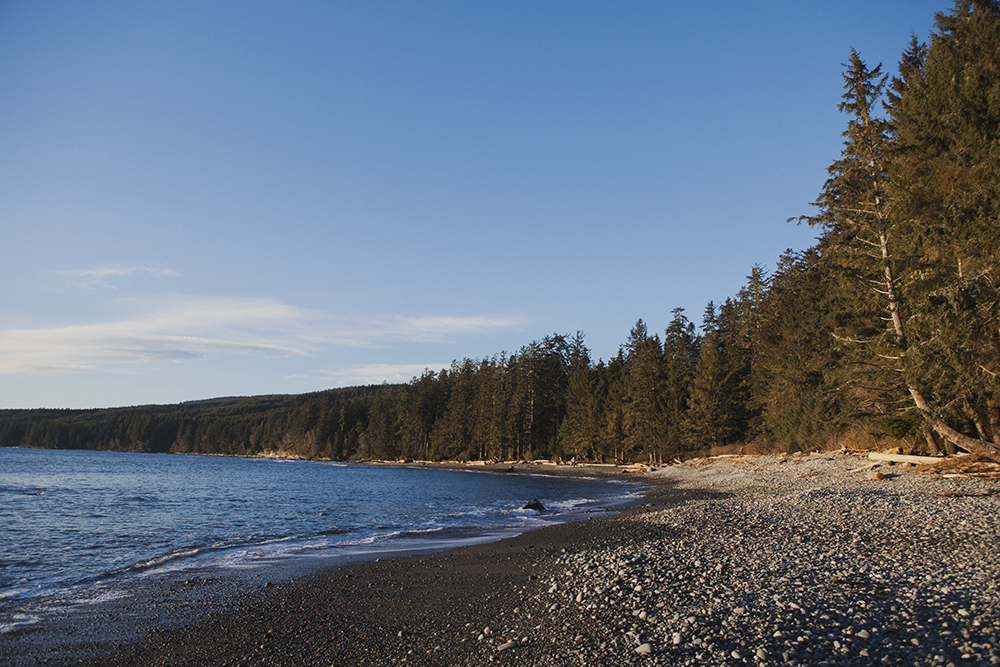 What do you do when you’re stuck in Port Renfrew during a snow storm and your power is out? You keep it real, man! We were tourists, the regulars have this shit figured out. Most of the locals have generators and jerry cans already filled with gas for the common occasion of a power outage. We were tourists staying at Handsom Dan’s Cabin where no generator was in place. Fortunately, the cabin did have an outdoor propane barbecue that also had a burner for us to boil water. Without this, we likely would have gone home due to difficulty of cooking food- or rather a complete lack of cooking and resorting to just eating chips, cookies and alcohol. I actually found cooking outside awesome- I loved it. This felt more like camping to me, which you know is my favorite thing in the world. Keeping the “kitchen” ready included frequently sweeping off snow build-up and sticking our perishable foods into a designated snow patch. Every time I went outside, yes indeed it was cold but it felt like a mission. Our best meal by far was an enormous pot of spaghetti with a side of kale salad and over-the-top Ceasers. The mood was set by about a dozen candles and we had plenty of good laughs. 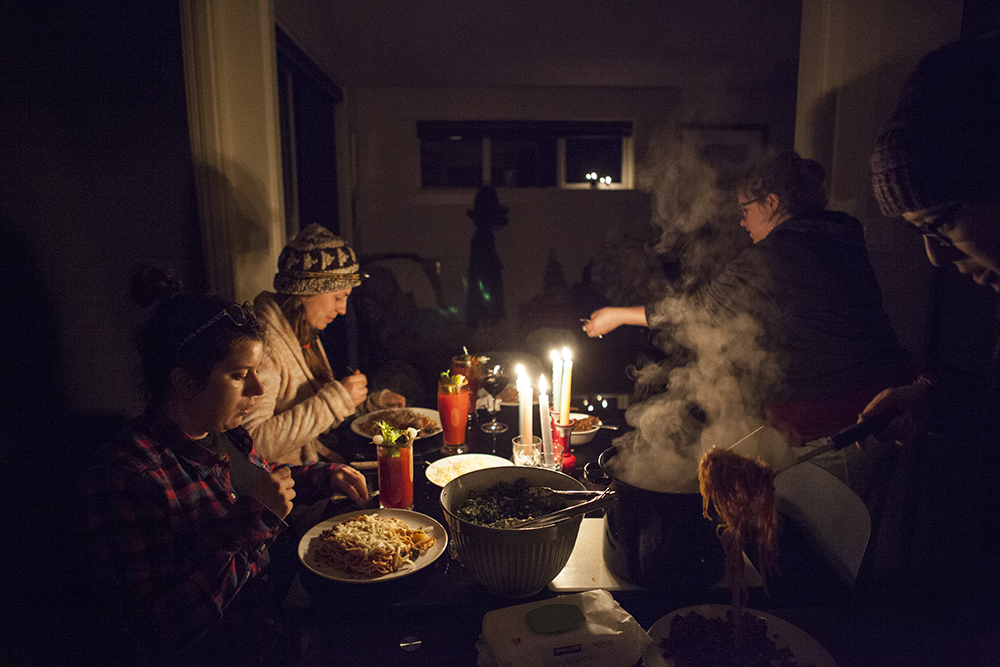 But seriously though, what do you do? Make sure you’re able to keep warm and have enough food and water. If you don’t, then see if it’s safe to travel home. A great resource and place to get warm and dry is the Port Renfrew Pub. I think we went here three separate times during our stay- as it had generated electricity and access to wifi. Here, we kept a closer eye on the weather and checked in with our people to let them know our plans. We planned on staying all three nights and would just drive slowly out of here when the time came. When the time actually came though, there was A LOT of snow. (A lot for Vancouver Island.) We had heard that the local fire hall had opened its doors to the public and was providing blueberry pancakes, a movie, warmth and real-time updates. We stopped in there to get our bearings.

The snow continued piling up and we weren’t confident about driving a truck full of women and a baby via the Pacific Marine Road thru to Lake Cowichan. Multiple trees had fallen over the HWY 14 to Sooke so that option was out. We waited. A snow plow was expected to plow the Cowichan route but exactly when was uncertain, they weren’t even sure it would happen that day. We decided to give it a go anyways. In the short 100 meter drive to the nearby intersection we saw a van slide out of control, neighbors helping each other put chains on their tires, and lastly the fire chief come out to meet us and advise us not to go. I’ll always remember him saying, “I heard that you have a baby on board.” He said it was up to us to make the decision but was it really worth all that we were risking? No, it wasn’t. Thank you for speaking out.

So we hung out at the fire hall that day. We each took turns using the hall’s phone and called our family, significant others and even our bosses. It looked like we would be staying another night and wouldn’t make it to work the next day. The generosity and hospitality of the locals at the fire hall was awesome. Locals came and went, we witnessed a fire call to a chimney fire, and spent time hanging out in their loft and I even got to use their punching bag. Little one-year old Ezri got to run around the fire trucks and play with a box of toys. After a few hours hanging out, waiting for news, we heard that the route had just been plowed and was clear of any fallen trees! We loaded up and drove slowly back home- snow falling around us, a world of white looking through every window. At one point during our journey back home, three furry Elk trotted across our path in what seemed like a magical and surreal moment in time. What a way to finish, what a gift of nature. 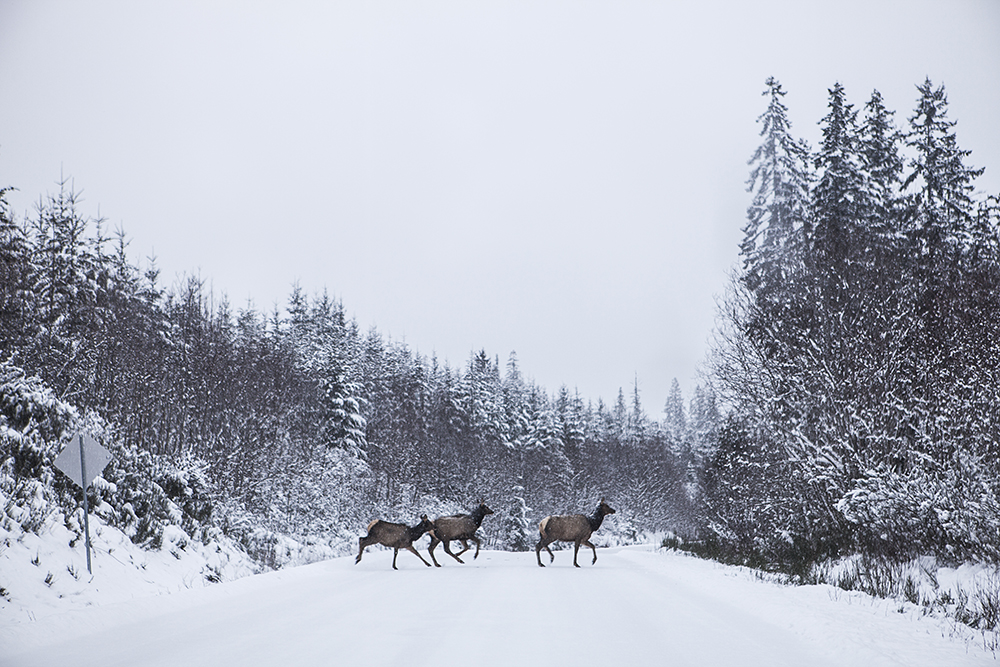 Things to Do in Port Renfrew in the Winter, Including During a Snow Storm Power Outage

Even though the snow continued to build up and there was indeed a storm happening, there are still a ton of things to do in Port Renfrew in the winter. There are many beaches including Botanical, Sombrio, Pacheedaht, and Mystic Beach. We visited Botanical and Sombrio while we were here and the views blew my mind all over again. Every single time I visit Sombrio Beach I fall harder and harder in love with the place. There’s something so magical about it I can’t even describe. It’s natures perfection. There is this recently developed and encouraged tourism in Port Renfrew to find and visit multiple big trees in the area- check it out here, they even have a map for you. Our goal was to visit Avatar Grove and the Big Lonely Doug. We made it to Avatar Grove before parking, not wanting to drive any further up hill as the snow was getting deeper and deeper. It was such a beautiful experience, only made more incredible and quiet with the snow falling. We took pictures beside Canada’s Gnarliest Tree and held umbrellas to keep the snow off of us.

Despite becoming greasier than we expected, we all had a good time. I love spending time in Port Renfrew, if you are an outdoorsy person you will never get enough. Port Renfrew is home to two amazing trail heads; the West Coast Trail and the Juan de Fuca Marine Trail. There are plenty of day-use beaches and parks to access, and you’ll absolutely feel an escape from the busy hustle of city life. Go check it out as soon as you can! ♥ 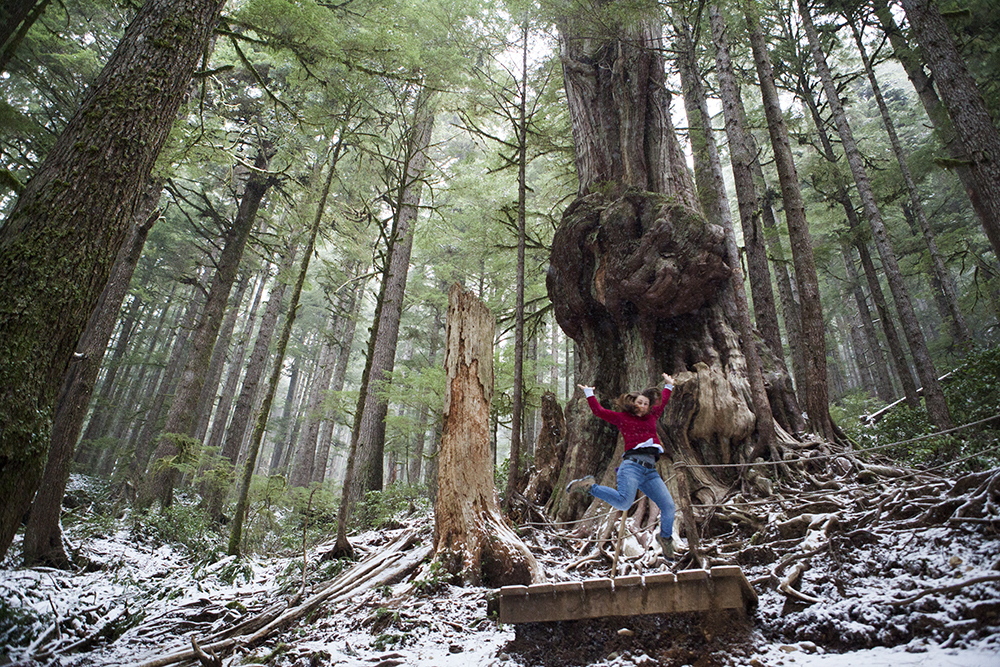