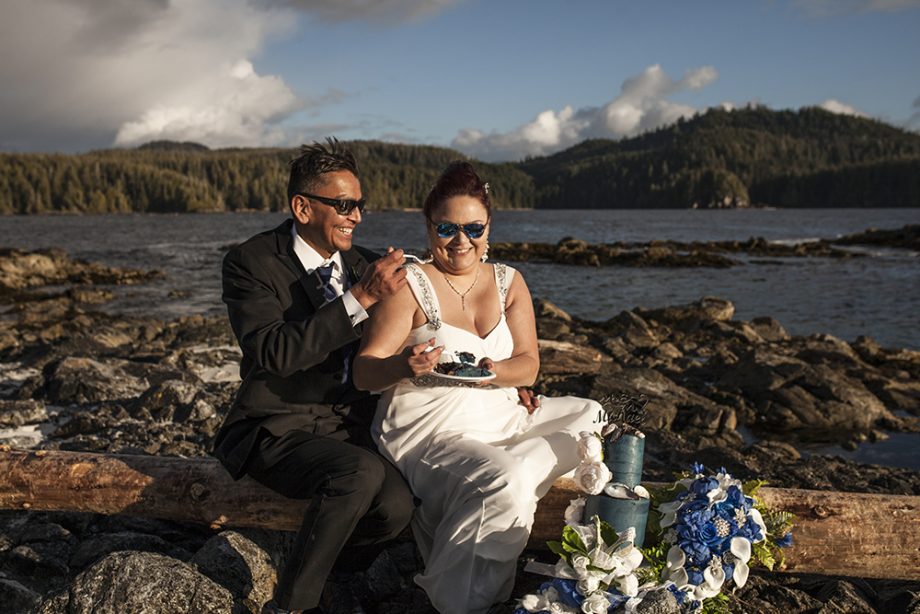 Tianna and Jordan eloped on the summit of Mount Cokely, choosing to enjoy an adventurous Vancouver Island helicopter elopement instead of the big shebang wedding they were originally planning. With the unpredictability of the Covid-19 pandemic, they decided to forgo their wedding plans with 100+ guests and spend time among the wild natural spaces of Vancouver Island. With West Coast Helicopter’s “Peak-to-Beach” elopement package, Tianna, Jordan, and three guests were taken to a snowy mountain to exchange vows and then over to the Broken Group Islands for a charcuterie board and beach time. This all-inclusive helicopter elopement package is a stress-free alternative to planning a big party, allowing you to relax among nature and enjoy the incredible sights. Andy, the pilot, doubles as the officiant and legally marries you atop of the mountain. A customized charcuterie board from The Noble Grazer is a hearty and pleasant snack once we land on the white sandy islands along the West Coast. The entire experience takes about five hours and is truly impossible to describe.

Tianna and Jordan’s helicopter elopement was a day they will never forget. At the end of the experience, Tianna exclaimed, “This was the BEST DAY EVER!” Tianna, Jordan, their daughter and their two best friends arrived at the Nanaimo hangar at noon that day, surrounded by their parents and a few other family members who would wave them off. Jordan changed into his suit in the hangar washroom, while Tianna finished attaching her veil in the parking lot. The sun was shining through some lingering clouds, and we were excited to see what the mountain and beach would have in store for us. After a safety briefing and familiarizing ourselves with the helicopter, we loaded ourselves into the chopper and secured our headsets. Andy fired the machine up and the propellers accelerated quickly. Seemingly effortlessly, the helicopter lifted off of the pavement and rose into the sky. Peering through the large windows, the Nanaimo cityscape became smaller and further distant. The wedding party was grinning huge, giggling, and snapping selfies with their phones as we made our way towards the distant snowy peaks. Andy put his wedding playlist on and we cruised through the sky onward to Mount Cokely.

On February 20th, at 1600 meters high on Mount Cokely, the temperature felt like -4 degrees. The wind was fairly light and the sun was shining. Tianna and her best friend Savannah wore fuzzy blankets, and warm leggings beneath their dresses to keep the chill off, but it was still rather cold so we quickly set up for the ceremony. Two cellphones were set up for a live Zoom viewing of the celebration, Andy got his notebook out, and everyone stood in place smiling at one another enjoying the 360 degree views of snowy mountains and Vancouver Island coastline around them. The daughter snuggled in between mum and dad as the ceremony began, but she was just too cold and didn’t love the wind chill, so Savannah sat with her in the helicopter as Tianna and Jordan married.

After the ceremony finished, ravens soared around us and danced together in the sky. Tianna and Jordan saw this as a good omen; Tianna has an affinity towards ravens and even has one tattooed on her shoulder. We spent some time just admiring them before taking some photos and jumping back into the helicopter for the next stop along the journey; the Broken Group Islands. They had brought a cake to their elopement, a simple two-tiered blue scraped icing cake, and set it into the chopper storage. Andy wasn’t aware they had brought a cake, so when we maneuvered the helicopter on its side along the mountain, the cake definitely bumped along its side. Tianna did not mind this at all, and promptly fixed up the imperfect icing blemishes with seashells found on the beach. With sunglasses on, Tianna and Jordan sat on a driftwood log in the sun and cut their perfect wedding cake. We spent a good two hours at the beach, which gave the group plenty of time to meander the beach and look for shells. Savannah found a few abalone shells, as well as a ton of beautiful swirly pink shells that look unlike anything I’ve seen!

Hanging out at the beach in the Broken Group Islands, everyone enjoyed beachcombing, eating cheese, crackers, chocolate, olives and other delicious things in their charcuterie, soaking up the sun, chatting about life, laughing at stories, and watching a flock of seagulls do nearly the same thing! On our way home, we watched the sunset from the sky and flew through a double rainbow! Every helicopter elopement experience with West Coast Helicopters is truly unique; the wild of the Island always has some natural gift for us.

Congratulations you two, and thank you for choosing West Coast Helicopters for your elopement experience! ♥ Wishing you a lifetime of love.